In this week’s Market Outlook, we take a look at the key charts of the week with #USDCHF, #EURUSD, #EURGBP and more!

In this week’s Forex Market Outlook, we’ll be identifying strengths and weaknesses and apply that to a few charts of interest. 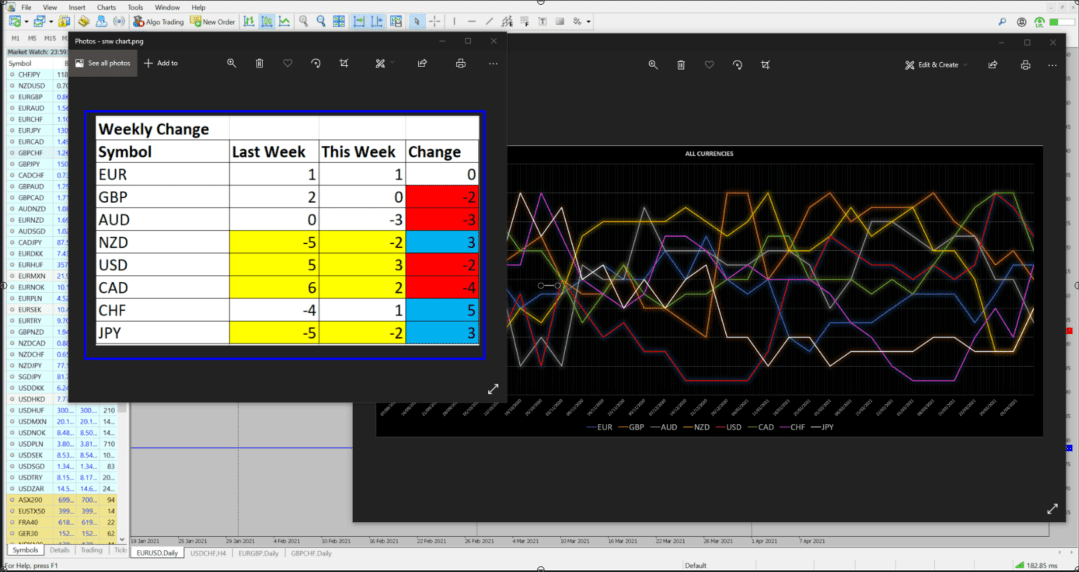 The strength and weakness table shows significant changes in currencies. The most notable is the Swiss Franc as the strongest currency last week, which can be seen visibly across the charts.

The weakest currency was the Canadian dollar. However, it has the potential to switch from being a risk currency to a safe haven.

The USD remains on the watchlist for weakness due to the reversal of its strength, in line with the recent seasonal analysis.

Let’s start off with the strength and weakness table. There have been a lot of changes to this table and most notable is the Swiss Franc.

We’ve been talking about this for the past few weeks. It’s starting to gain momentum from low-value areas. When we talk about the Swiss Franc, it’s the pink line on the strength meter.

As soon as we start taking a dip, we need to take notice of it. We have seen a decent upward move in the Swiss Franc since, especially when the strength came through against other currencies last week. So, it’s definitely something we can focus on this week.

I also like that the EUR remained neutral. I actually think there’s more upside to expect from EUR.

The EUR is the blue line, and it is trending up slightly. But the Swiss Franc, the strongest currency, is definitely the one to watch this week.

We can watch it against different currencies. The US Dollar has been moving negatively, in line with the seasonal analysis. We could see USD/CHF as one of the charts to watch.

Meanwhile, we can look for some US Dollar weakness elsewhere, like pairing it against the JP Yen or the Kiwi. This is because we saw Kiwi bounce from -5, and it merged with the JP Yen line. Now, we are starting to see some upside.

I’m going to focus on the Swiss Franc for today. I’m also going to touch on the GB Pound because it took a nice dip since we talked about its potential weakness.

Last week, we spoke about the 1917 level as a decent point.

I’ve looked at the volumes again to see if there have been any accumulation.

The volume level moved towards 1925, but anywhere between 1915 and 1925 was the area where we saw decent height volumes come in. Now, we have to look at the assessment of the trend, which is a downtrend.

If we look at the weekly timeframe, it doesn’t look bearish here but bullish.

I would be a buyer of this market due to the move down into the level projection of this particular volume zone at 1.1778.

This week, I’m thinking that we could see a dip before a breakout, and a move higher in line with the seasonal opportunity on the US Dollar.

If I go down into the four-hour timeframe, we can see that there was a lot of buying.

We haven’t tested the volume levels here yet. 1.1778 was a level that was really interesting to me, so I looked at that area and found that there was a lot of volume coming in.

I can expect to see either an early pullback later in the week – a retest of this area for a long opportunity – or the US Dollar could just continue to weaken and we can expect to see a breakout of the current highs around the 1926 area. 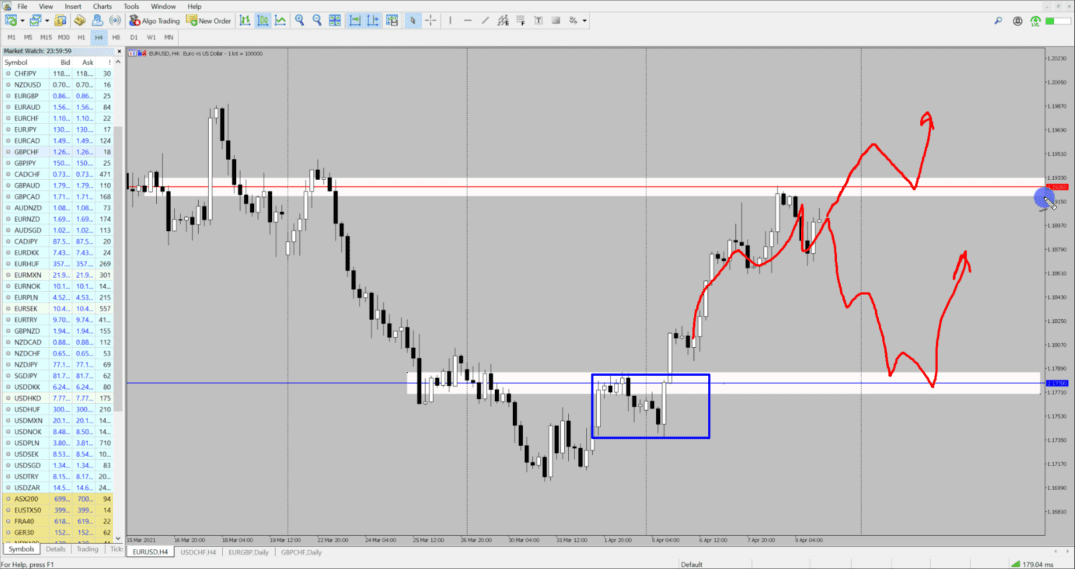 EUR/USD is the one to watch again this week after the strong bullish weekly close from the recent support level. We are waiting to see if the USD will continue to weaken, so we could see a breakout of the highs around 1.1926 or we could see a pullback into a high volume level at 1.1778 where buyers could re-enter.

USD/CHF is the inverse of EUR/USD. We have a really nice strong bearish week compared to the bullish week on EUR/USD. Why did the price fall while there was a huge supply zone on USD/CHF?

There was strong selling coming into the market, then we saw a huge move to the downside.

The price came back to 94520, and it allowed institutions to get back in. That means that we could see some downside further on.

As the 23.6 moves, we can use the Fib tool and start at this swing low. It’s going to bring it up to the current swing high, and we can see that the price closed below 23.6. That is a sign that we could see a trend reversal.

We could expect a retest for the potential right shoulder to form. That could lead us to a nice short position on USD/CHF. USD/CHF could also provide both short and long term opportunities this week. The daily timeframe could form a head and shoulders pattern after reversing from the major supply zone at 0.9450. This means that the right shoulder of the pattern could form at the left shoulder highs around 0.9375.

There is a demand zone resting at 0.9200. That could be tested before we see the reversal, so short term opportunities could be at the minor resistance at 0.9300.

Alternatively, we have a demand zone at 0.92. If we look at the four-hour timeframe, there is a huge demand coming. Why is this a huge demand zone? It’s because there was a slight consolidation and a huge buying momentum coming from the market.

Again, we haven’t retested the demand yet. So, I’m expecting the price to do that. I also put an alternative level at 0.93. This is so we could see a complex pullback into 0.93 and move down to the demand zone for the price to pull back after.

I would also like to see some selling come back in at 0.375. That would lead me to look at the strong against the weak currency.

We know that the GB Pound is weak and Swiss Franc is strong. It’s a very similar price action where we’ve got a huge bearish candlestick.

I’m expecting some downside because we had a huge accumulation. That means that institutions are building positions around this zone, and we decided to break out higher.

We could actually be moving back for long opportunities, so we could see some downside further on.

The daily timeframe is breaking through recent lows. There are a couple of levels that I want us to take note of.

There are some sellers coming back. The ideal level for me would be at 129.46 because we have selling pressure coming from that point. It may even come from somewhere higher in this area for a short opportunity. GBP/CHF could also be the one to watch when we think of a weak currency against a strong one. The price has recently formed a new low on the daily timeframe, confirming a change of trend. The key resistance levels are at the recent swing highs at 1.2946 and the lows at 1.2786. Either of these levels could see sellers re-enter the market. The demand zone rests at 1.2635 and will be likely targets for short sellers.

We saw a lot of buying coming in at 0.849, which is something that we spoke about a number of times.

I think we’re going to get a decent pullback. The level that would be of interest to me is back down at 0.8499 because this is where we have seen a lot of buying.

Alternatively, we have a level of 0.8562. If the price were to pull back into this area, I’d be looking for long opportunities from here or from back down at 0.8499. 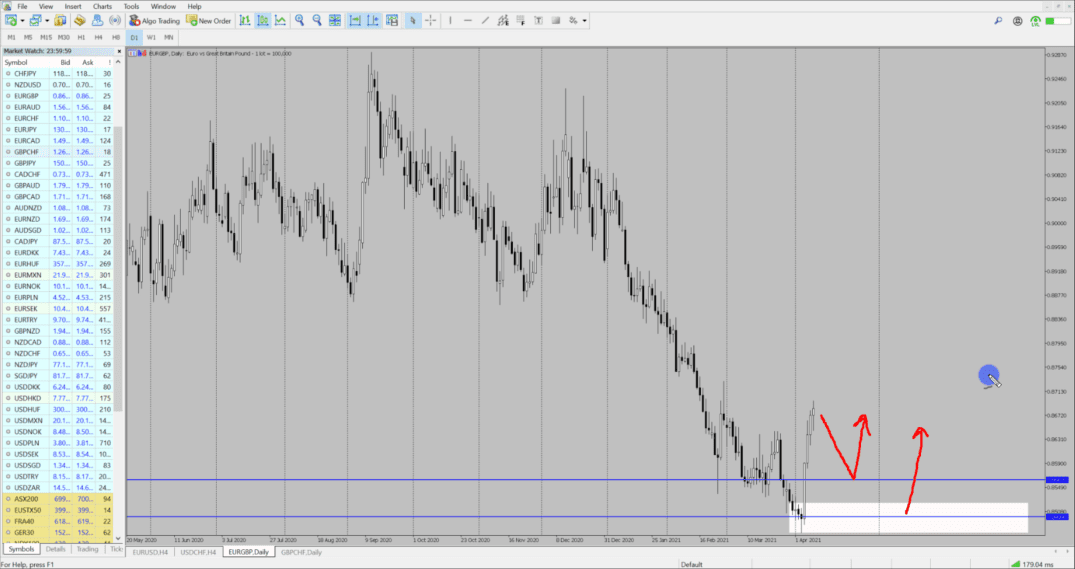 EUR/GBP is the inverse of GBP/CHF, making it an alternative currency pair to watch. We recently talked about the key level of 0.8499 as the level where we could expect buyers to come in. Now that buyers have stepped in, we could see a continuation on a higher low. This could come in at the support of 0.8499 or 0.8562.

Apply what you learned from this Forex Market Outlook in this week’s trades. The good news is that you can test your trading strategy risk-free. Sign up for a free Blueberry Markets demo account by clicking here.