What is a candlestick pattern?

A candlestick pattern depicts the price movement of an asset in a graphical manner. It enables traders to predict market behaviour by analysing past trends. A candlestick has three critical components: 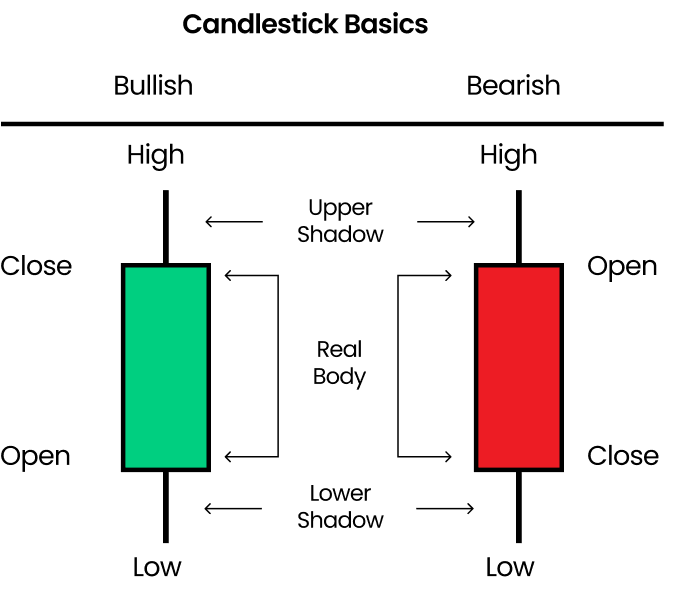 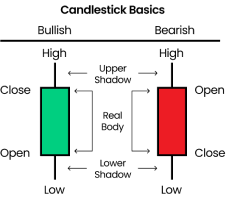 20 candlestick charts every trader should know

1. Morning Star
The Morning Star pattern is a bullish candlestick pattern with an extremely small body candle between a green candle and a red one. It reveals a positive market sentiment as the day ends because it signals that negative selling pressures and market downturns in the day are subsiding, and a bullish market will soon happen. This gives a buying signal to traders as the market is now expecting an uptrend.

2. Hammer
The Hammer candlestick pattern is a bullish pattern formed with a short body and long wick at the bottom. It indicates that even though there were selling pressures for a particular asset during the day, in the end, intense buying pressure increased prices. The Hammer candlestick pattern sends a buy signal to traders as the prices are increasing.

3. Inverse Hammer
The Inverse Hammer is one of the most accurate bullish candlestick reversal patterns, with a long upper wick and a short lower wick. This indicates that there has been buying pressure throughout the day with a selling pressure towards the end. But, it was not strong enough to drive down the currency pair price. This chart pattern signals traders to buy the currency pair for potential profitable trades.

4. Three White Soldiers
teThe Three White Soldiers consists of three green candles that have small wicks. The wicks represent the opening and closing at higher prices than the previous day. It sends a strong bullish signal known to occur right after a downtrend and signals traders about a steady and robust buying pressure.xt

5. Shooting star
The Shooting Star pattern is almost the same shape as that of an Inverse Hammer pattern. However, it is formed in an uptrend and consists of a small body with a long upper wick. The opening and closing prices in a Shooting Star pattern are near to one another and give a bearish reversal signal. The pattern gets its name because as soon as the market opens, the price shoots up to its high price point before closing at a price near to the opening price. This signifies a fall in price towards the end.

6. Three Black Crows
The Three Black Crows pattern is the inverse of the Three White Soldiers pattern. It consists of three consecutive red candles with either little to no wicks. The currency pair price opens at a similar price as the previous day, but the selling pressure throughout the day pushes down the price even lower. This is known as the commencement of a bearish downtrend as selling pressures are more substantial than buying pressures.

7. Evening Star
The Evening Star pattern is another three-candlestick pattern. It is formed by a short candle between long red and green candlesticks. The first candle is bullish, the second is a candlestick with a very near open and close price, while the third one is bearish. It signals an uptrend reversal with decreasing prices that follow each day. This sends an exit signal to traders due to the falling currency pair prices and potential market downturn.

8. Hanging Man
The Hanging Man candlestick pattern is formed at the end of a market uptrend. It depicts that after a significant daily sell-off, buyers were able to push prices back up. The body of this candle is short and has a long lower wick, mostly twice the body's length. It indicates that the market is going to be bearish. Hence, it signals traders to exit the market as soon as possible to minimise losses.

10. Bearish Harami
The Bearish Harami pattern has two candlesticks: a tall bullish candle and a small bearish candle, which is in the same range as the first one. It is formed after a market uptrend and indicates a reversal soon. The pattern sends a signal to traders to go short in the market after the pattern is complete. 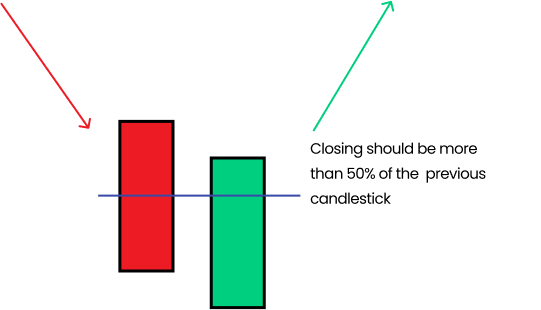 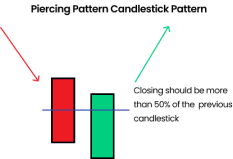 15. White Marubozu
The White Marubozu pattern consists of a single candlestick formed after a downtrend. It indicates a bullish reversal as the candle has a long bullish body marked in green colour. It does not have wicks, which means that the buying pressure is intense enough for a bullish reversal. This pattern signals sellers to be cautious of their positions and close any shorting positions in the market.

16. Tweezer Bottom
The Tweezer Bottom pattern reveals a bullish reversal. It is formed during a downtrend and consists of a bearish and a bullish candle. Both candles have similar low currency pair prices. Since the downtrend is set to reverse when the pattern completes, the bulls should be ready to enter the market and push the price upwards.

18. Black Marubozu
The Black Marubozu is the opposite of a White Marubozu candlestick pattern. It consists of a single candlestick formed after an uptrend, followed by a bearish trend reversal. It also consists of a long body without wicks. The absence of wicks indicates that the selling pressure in the market is strong enough to make it bearish. It sends a cautious signal to buyers to close their existing positions to avoid losses.

19. Falling Three Methods
The Falling Three Methods pattern is a multi-candlestick bearish pattern. It is a continuous pattern that signals an interruption in the market, and not a reversal. It is made of a long bearish candlestick at the beginning and end, with three bullish short candlesticks in the middle, each opening at a higher price than the previous day. It indicates that even after three consecutive days of a bullish trend, the bulls are not strong enough to reverse the trend. Hence, any buying decisions should be put on hold. 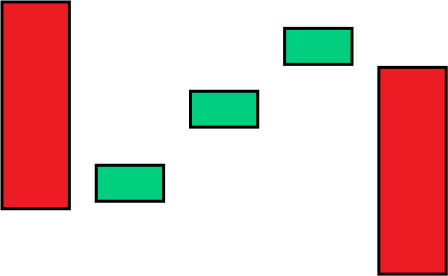 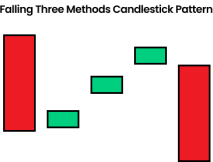 Strategise your trades with candlestick patterns

With Blueberry Markets, you can trade a vast number of currency pairs with complete reliability, scalability, and transparency.

Blueberry Markets provides industry-standard platforms and tools to make your trading experience as seamless as possible.
Create an account now to see the difference.

Enter your details to get a copy of our
free eBook

Ready to trade at
Blueberry Markets?