The #GBP could be about to strengthen significantly due to the UK rolling out a successful vaccine programme and reducing lockdown restrictions. Could this provide buying opportunities?

In this video, we take a look at #EURGBP as there could be a breakout opportunity forming.

Watch the video to learn more…

Today, we’re going to look at EUR/GBP as there could be a potential short opportunity in this market.

The GB Pound was one of the strongest currencies last week. That can be put down to the fact that the UK is now opening up after a successful vaccine rollout program.

The UK is starting to open up for businesses, which could create some strength for the UK and the GB Pound due to the fact that people will be out spending money in businesses. Businesses will then be able to afford to grow or at least bounce back from their losses. Some businesses may even be able to repay the government-backed loans or grants that they received.

This will also boost the UK economy. So, the GB Pound is looking pretty strong. This is the flip of its seasonal pattern.

The GB Pound usually has a poor performing month in May. But because of the situation that we are in, we are not likely to see that seasonal pattern play out. Which means that the EUR/GBP could have an interesting development.

The reason is because the price recently rallied from the significant level at 0.8499. But the zone below is where the price turned and rallied to the upside.

Now, we had a consolidation pattern, a breakout, a retest of a volume level, and the price dropped quite significantly to the downside. This is making me think that sellers are involved in the market, and I wouldn’t be surprised if we came back and retested the area where we saw a strong upward move. The EUR/GBP recently rallied from the support of 0.8499 and will likely be a target for sellers in the market. The daily trend recently formed a new lower low, and the price is finding resistance at those lows.

If we go to the four-hour timeframe, we can see that the price moved down aggressively, and now, we’re consolidating back up. There aren’t any buyers at the moment. All we’ve got is some slight retracement, and a bit of a flag pattern.

The market made an impulse move to the downside. The corrective pattern price is now finding resistance at previous structure lows where buyers came in, pulled back, and found resistance.

I’m looking for the market to break out of the supporting trendline. The market already found support a couple of times here. If the price breaks through, then I would expect a move to the downside, with targets at the demand zone at 84.99. 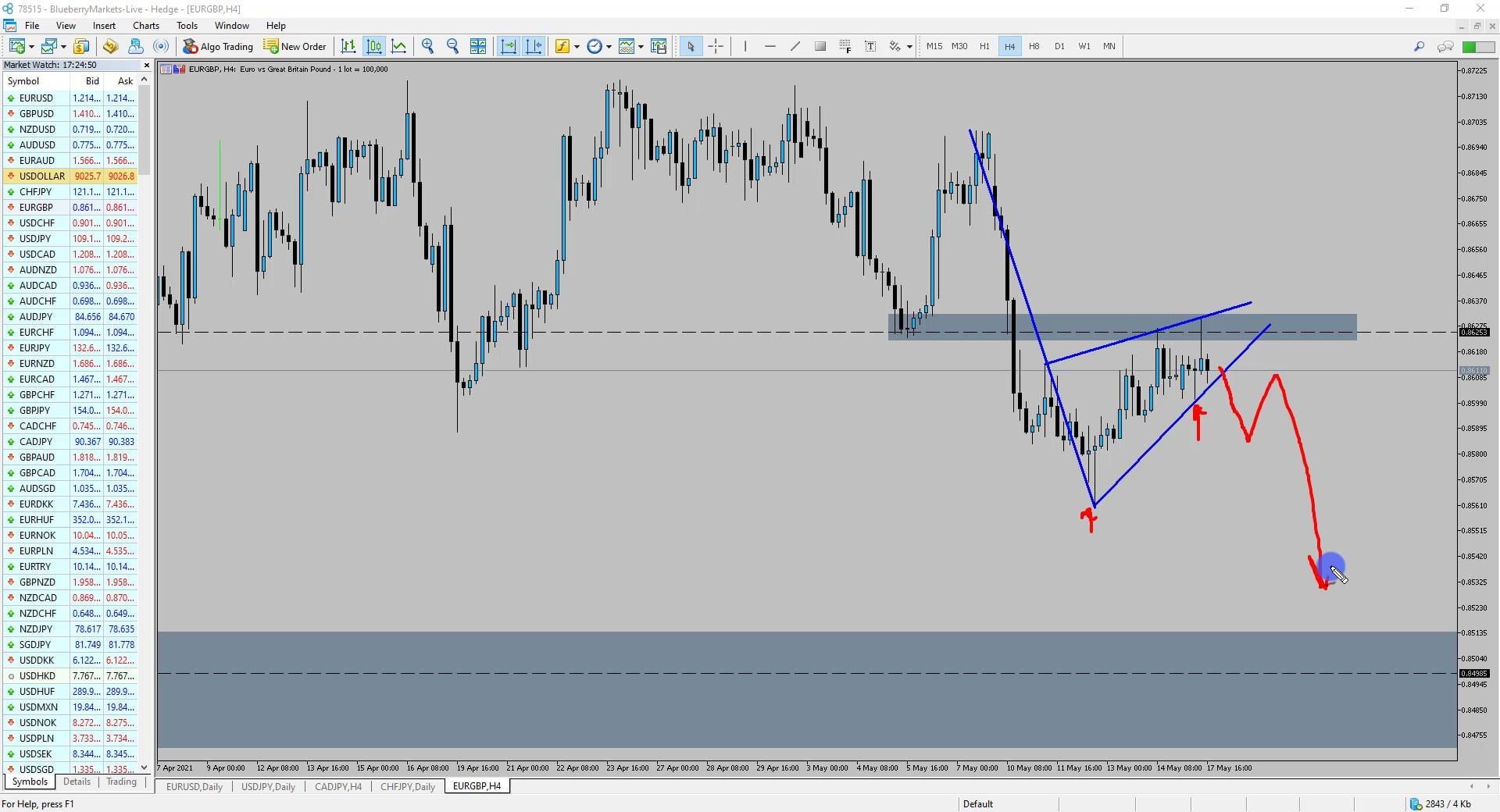 On the four-hour timeframe, we can see a clear flag pattern forming, with the price consolidating below the resistance after an impulse lower. If the price breaks the lows of this pattern, then we can assume that the trend will continue down to the major support level.

Keep an eye on EUR/GBP. There could be a breakout opportunity here.