Investors are provided with market outlook insights to help plan out their long term goals. Read the latest commentaries from our industry experts.

As expected, the Brexit headlines continued into this week with Boris Johnson announcing on Twitter that the EU and the UK have come to an agreement on a fair deal. This continued to move sterling higher with prices reaching highs of 1.3000. We must remind ourselves that Boris Johnson still needs to get his deal passed through the UK parliament which could prove difficult. If the ministers were to reject the new deal presented to them a no-deal Brexit will become more likely which would be negative for the Great British Pound. What we do know is that Brexit headlines will continue to cause volatility to the GBP ahead of the deadline day on October 31st.

Australian employment fell to 14.7k this week as expected backing the need for more stimulus from the RBA. Despite this, the Australian Dollar rose this week against the USD and JPY showing us that the further rate cuts will likely be priced in by the markets.

The USD index shows the price breaking through the long-term supporting trendline from the 2018 lows. This could lead to the further decline of the USD technically speaking. Fundamentally the Federal Reserve’s chances of cutting rates remain high which is driving the USD lower.

GBPUSD continued to rise this week reaching highs of 1.3000. The price is trading above the key trendline resistance from the 2018 highs giving technical traders long opportunities. The price is currently capped at the 1.3000 resistance where we could see some short-term selling re-enter the market.

AUDUSD climbed against the USD this week with the double bottom pattern looking more and more likely to complete. With price forming another weekly higher high, higher close we can anticipate further upside to this currency pair with the highs of 0.6900 being likely targets.

NZDUSD found support once again at the lows after having a bad start to the week. This fall in price came as a surprise considering CPI data for Q4 came in higher at 0.7%. We could see an increase in long contracts from the commercials once again in the commitment of trader report considering the initial fall in price. We expect prices to continue to move higher towards the 0.6440 highs.

USDCAD continued to move lower as expected this week highlighting the USD weakness. As with the recent impulse moves, we typically see 5 weeks of bearish momentum from the pair suggesting we could see a continued sell-off into the support lows.

USDCHF rejected the key range highs once again breaking through the trendline support. If the USD continues to weaken, we could see the currency pair prices head towards the range lows around 0.9700. 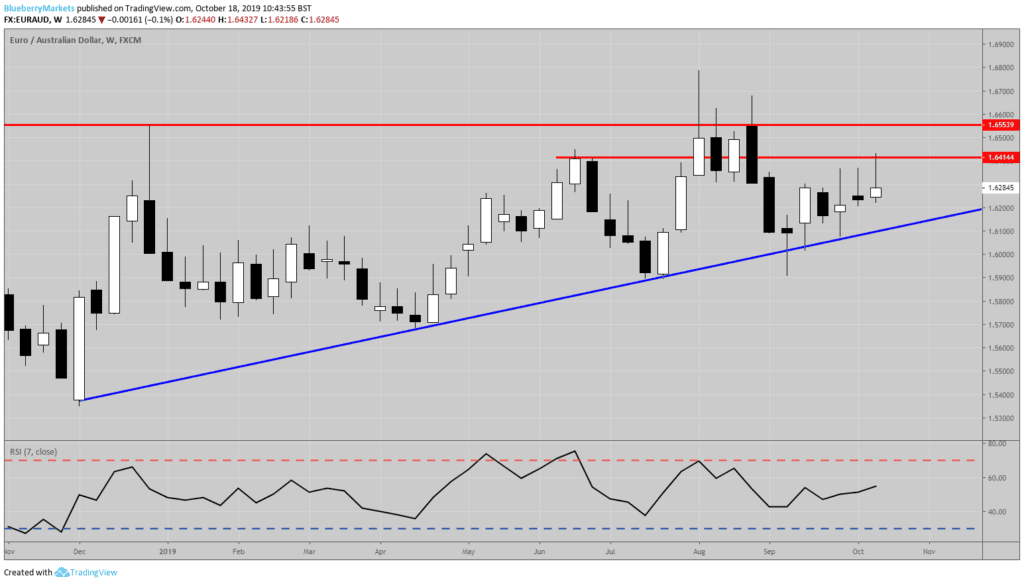 EURAUD could be a chart to watch going into next week as price failed at the left shoulder resistance of the head and shoulders pattern. The weekly candlestick shows the price continuing to close back within the previous candlestick ranges suggesting sellers are active on this market and we could see prices back at the trendline support.