Week Ahead Analysis﻿: 17th May

In this week’s Market Outlook, we take a look at the key charts of the week with #USDJPY, #CADJPY, #CHFJPY and more!

Today, we’re going to look at the JP Yen as it started to stall a little bit at the -5 level.

The JP Yen gained a bit of value against other currencies but we saw a slight drop off and another decline. Now, it’s making me ask the questions: what’s going on with the JP Yen’ currency strength? Are there any opportunities in this market?

Typically, when a market is at an extreme, we want that extreme to flip and move higher. But it also shows us that this market is incredibly weak.

I’ve picked a couple of pairs against the two extremes. The Swiss Franc is moving downwards, and we also have the CA Dollar – both strong currencies at the moment. 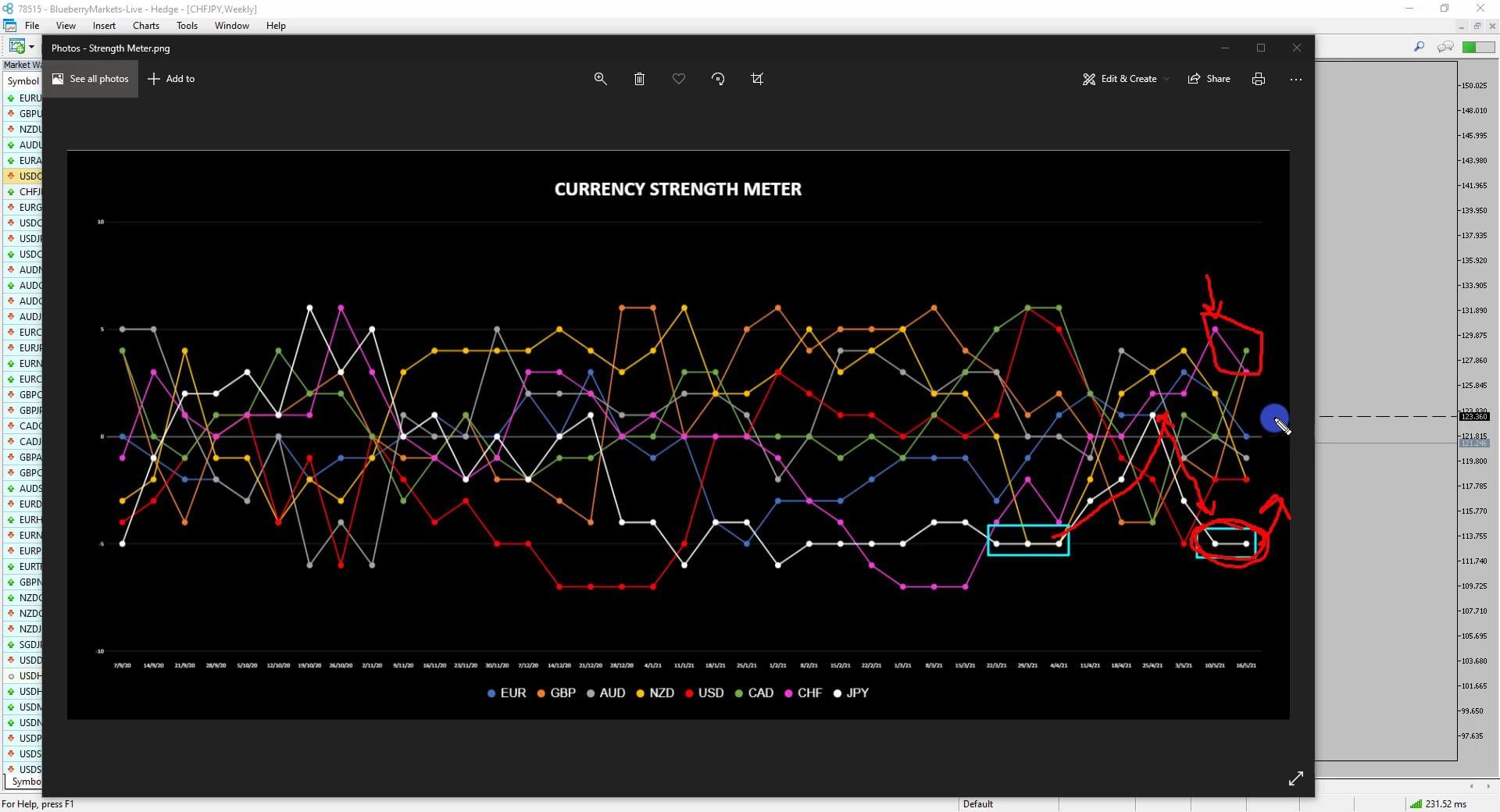 The strength meter this week shows us that the JPY is the weakest and the CHF and CAD are the strongest. Our focus for this week’s Forex Market Outlook video is on the JPY. Now, the price is at an extreme and we could see the JPY start to strengthen. But, which charts are important?

I’m going to take a look at those pairs against the JP Yen to see where they are positioned in the market.

I’m going to start with the USD/JPY because this is an interesting market. Remember when we wanted to trade the cross pairs, we looked at the majors against them. So, let’s say we are trading CHF/JPY.

So, if I put out the equivalents, I want CHF/JPY or CAD/JPY to start moving lower. We also need to see USD/JPY vs USD/CAD for CAD/JPY, and USD/CHF vs USD/JPY for CHF/JPY.

We need to see the USD/JPY move lower, but we also need to see USD/CHF move below because it’s not the base. If we were to flip that over and saw it as CHF/USD or CAD/USD, we’d want to see these markets moving upwards.

We had a decent move to the downside on USD/JPY. Since then, the price has been meandering on its way back up. Now, it looks like it will take another break to the upside.

It’s still showing some weakness, which is what the other cross pairs are also showing. If I were to go up to the weekly timeframe, I would want to be a seller where the highs were.

The selling happened, and in the daily timeframe, the 110.72 is the area of interest for me. This would be an area where sellers would come back if the price were to continue to break to the upside. That’s an option if the JP Yen gets weaker.

If the JP Yen starts to gain strength, we have a channel and a bit of a flag pattern where the market has driven to the downside. Now, we’re getting a consolidation within the high and low.

I would be looking at that as a potential to break out and continue down. The base currency of the US Dollar is another factor because it isn’t the weakest nor the strongest. It is a bit of a mixed bag for the US Dollar at the moment.

Looking at the USDJPY, the price could be building for a breakout lower. In the daily timeframe, the price shows a significant resistance level at 110.72 where sellers could re-enter the market again. However, we are also seeing a flag pattern which could lead to a breakout if the price breaks the trendline support.

That’s the other obvious factor. But if the JP Yen gets stronger, I would expect a breakout to the downside.

In the weekly timeframe of CAD/JPY, the 91.20 is a level in the past where the market found resistance. I’m expecting that to happen again but we need to see some kind of reversal pattern when the price comes into these levels.

The key reversal patterns we can look for are either a head and shoulders pattern or a double top pattern like this.

I would look for the price to move higher to 91.20 before seeing the move down. Again, the CA Dollar is very strong at the moment, while the JP Yen is very weak. This is a perfect uptrending scenario. So, if you want to trade the trend, then you are looking for buying opportunities at 91.20.

However, we’re getting a consolidation towards the top of this trend. The market is working within the channel on the four-hour timeframe, and it tends to be heading towards the lows of the channel.

That could also mean a breakout. If the price came and took these lows out at 89.28, then I would expect further downside to this market. 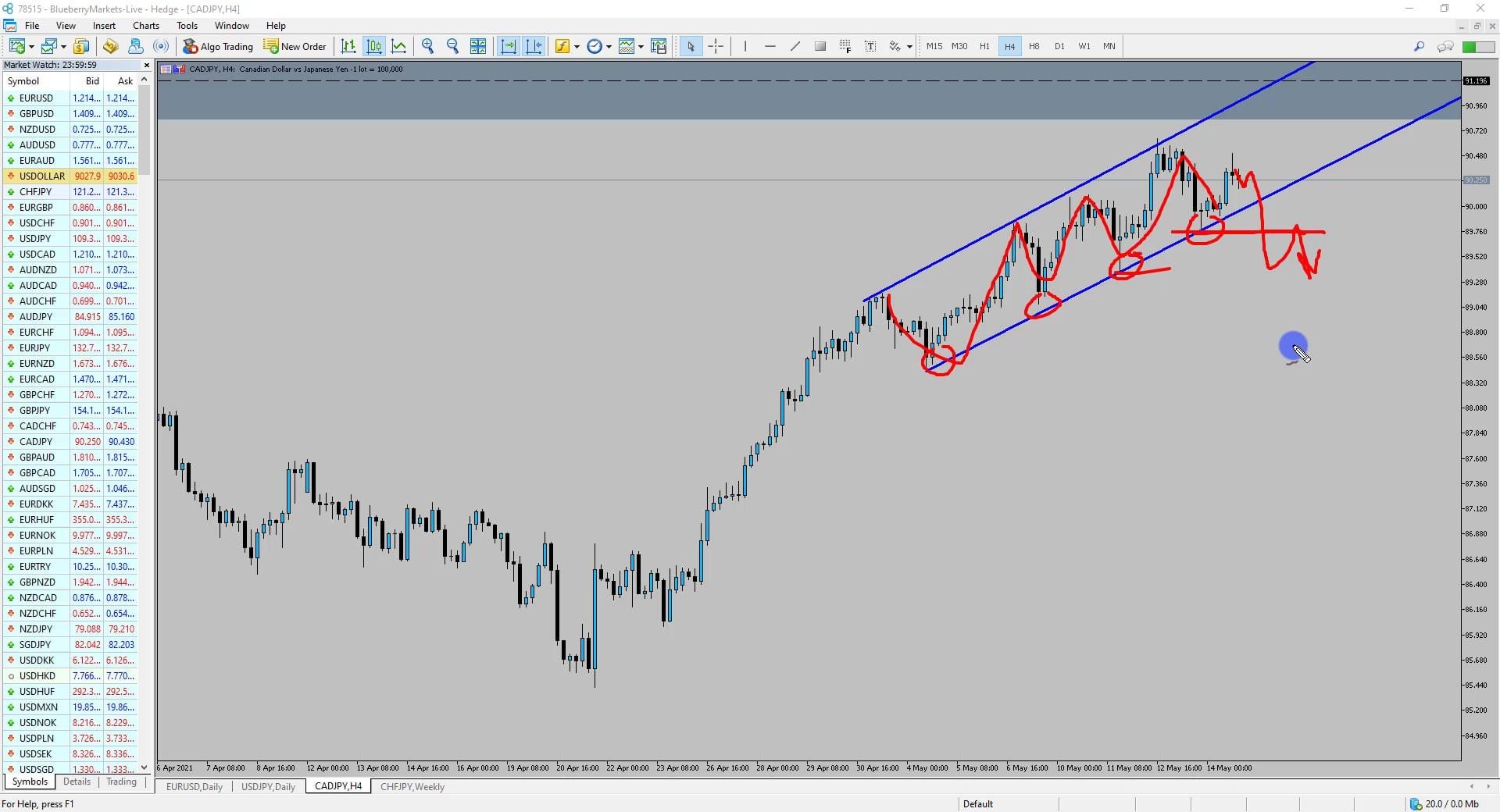 CAD/JPY is an interesting chart as the two currencies are on opposite sides of the strength meter, highlighting the severe uptrend on this market. Again, there is a key resistance level up at 91.20 which is where the market could form a reversal pattern. If the market doesn’t reach this zone, we could be watching the four-hour channel for a breakout of the low

The sellers of CHF/JPY on the weekly timeframe came in at 123.36. Lots of selling pressure came from that area. Are we going to see the same thing again at that point? Only time will tell.

If we go to the daily timeframe, we have a way to go here compared to CAD/JPY. This would go higher before seeing a reversal pattern, but that is an area where I would rather be a seller at 123.36.

Alternatively, we could just watch this daily trend. If the daily trend starts to change and breaks below the current low at 119.99 or 120, then there’s an obvious challenge or trend there. That would show us that the JP Yen is getting stronger and we could see a reversal coming into place. 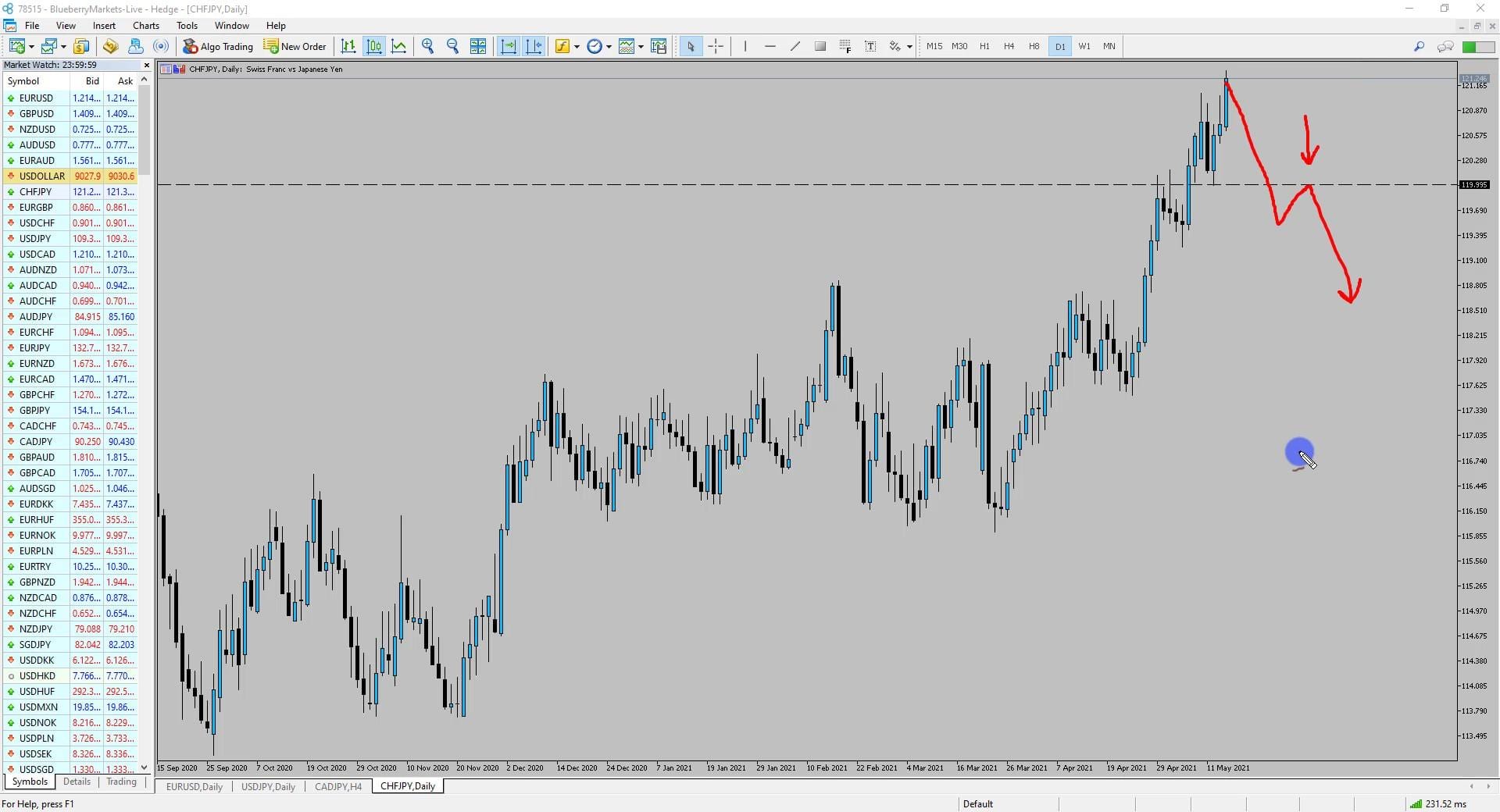 CHF/JPY is another market that could reverse if the JPY gains strength. The supporting lows on the daily timeframe rests at 119.99/120.00. This needs to be broken and closed below if the price were to reverse, the market could find support here for the ongoing uptrend.

There are a lot of things to consider at JPY. Alternatively, you want to be a buyer of the JP Yen at the moment because it is weak. However, we could see a reversal coming soon.